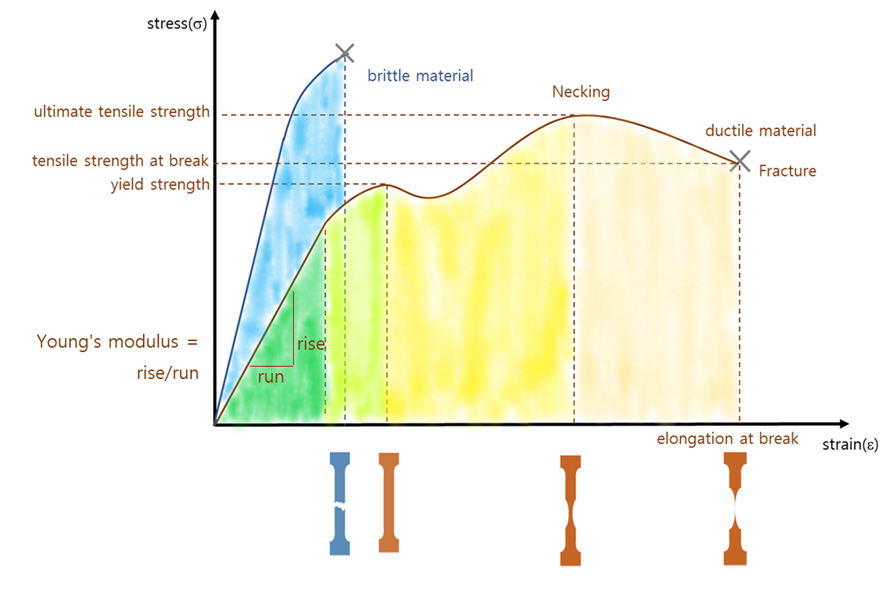 Stress can be defined by the internal resistance per unit area against deformation which is caused by an external force.
Strain is the amount of deformation a body undergoes in the direction of the applied force divided by the body's initial dimensions.

The newly introduced 『Knowledge Fab』 is a series of content focused on in-depth knowledge regarding 3D printers.

We hope that Knowledge Fab will give you a better understanding of 3D printers.

The selection of material is one of the keys to being successful in 3D printing.

The TDS lists a variety of information, and it is important to understand each one.

Today's knowledge fab will take a look at the stress-strain curves covered by the TDS properties.

It's easy to assume that stress equals pressure, but this is not the case.

Pressure can be defined as the amount of force exerted per unit area.

While stress is the internal resistance force per unit area against deformation caused by an external pressure.

For example, when someone pulls a spring, a stress is applied to the spring, trying to return to its original position.

The formula for calculating the stress is:

Tensile stress occurs when an axial force pulls outward from both the ends of an object.

Compressive stress occurs when an axial force is pushed inward toward the center of an object.

Shear stress occurs when parallel but opposite forces are applied to two surfaces.

Strain is the ratio of total deformation to the initial dimension of the material body on which forces are applied.

The formula for calculating the strain(e) is:

X is the original dimension of the material, while Δx is the amount of change in dimension.

Strain is dimensionless because it merely defines a ratio.

Figure 2 shows an example of a stress-strain curve by tensile testing.

This curve is obtained by gradually applying a load to the test specimen and measuring the resulting deformation of the specimen.

From the curve, the following mechanical properties value can be obtained.

Initially, the stress and strain are linearly proportional. In this region, it follows Hooke's law.

The slope of this region is the Young's modulus, which indicates how elastic the material is expected to stretch when subjected to a specific tensile load.

Young's Modulus unit is the same as the stress unit because strain is dimensionless.

After that, the curve has a range where stress values ​continuously increase until the yield strength.

Stress and strain are not proportional, but when the test is stopped during this range, the elastically stretched material returns to its original position.

Beyond this limit, the material does not return to its original position and plastic deformation begins to appear in the material.

Necking is observed at one point in the specimen when the stress reaches its ultimate tensile strength.

The stress is so high that cracks form at the weakest point of the specimen.

A fracture occurs when the material reaches the maximum strain it can withstand (elongation at break).

Materials such as glass and ceramic exhibit brittle failure, which breaks very rapidly without plastic deformation.

More ductile materials (including most metals) may experience some plastic deformation and necking before fracture.

Today, we focused on the basic definitions in order to understand the properties of the materials.

Next time, we will take a closer look at the characteristics of the materials used in actual 3D printers based on this information.

PLA and ABS are the most commonly used plastics in the industrial 3D printing process.

FFF (FDM) 3D printing is the most commonly used method because of the simplicity, intuitiveness,...