3D Printing Principle: The Process of Photopolymerization of Resins in SLA | Knowledge fab

Photopolymerization of Resins in SLA

When the photoinitiator absorbs UV, the molecule splits into two radicals.
These radicals combine with monomers to form new radicals that combine with other monomers.
This chain reaction forms polymer chains to transform the liquid photopolymerized resin into a solid state.

In a previous blog, we discussed various 3D printing technologies, and we mentioned that SLA printers cure resins by photocuring. Let's take a more detailed view at the resin photopolymerization process.

Photopolymerizable resins generally consist of two or more monomers or oligomers and a photoinitiator, and may contain additional additives or pigments. The molecular structure and size of the monomer and the proportion of oligomers affect the viscosity of the resin. The role of each element is as follows.

Molecules combine atoms through ionic or covalent bonds to create stable states with lower energies than their separated atomic states. When an event breaks a covalent bond within a molecule, the molecule can split into two electrically neutral atoms(or molecules) with an electron shell, and an unpaired electron.

An atom or molecule with an unpaired electron in its outermost electron shell is called a radical. Radicals can be viewed as having some kind of dangling bond. The electrons try to pair again and return to a lower energy state, so when another atom or molecule approaches, the radical bonds easily.

When the photoinitiator absorbs UV, the molecule splits into two radicals (primary radicals). This primary radical (R･) reacts with a nearby monomer (M) to form an initiating radical (RM･).

A crosslinker is a molecule with two or more weak links forming a dangling bond, which can react with more than one radical, resulting in a more twisted polymer chain.

When radicals propagated through a chain reaction meet and bond with other radicals, the dangling bonds cancel each other to lose reactivity and the photopolymerization is terminated.

After photopolymerization, the resin in the final state becomes a polymer chain, loses fluidity, and solidifies.

The figure below is a more professional representation of the molecular structure of the example of the photopolymerization initiation process in the figure above. 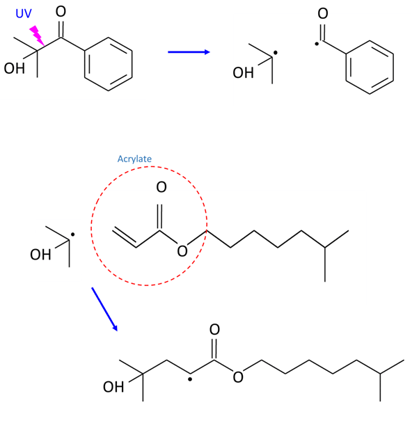 Thanks for joining us!

Glass transition can be defined as the transition of a material from a hard glassy state to a...

FFF (FDM) 3D printing is the most commonly used method because of the simplicity, intuitiveness,...